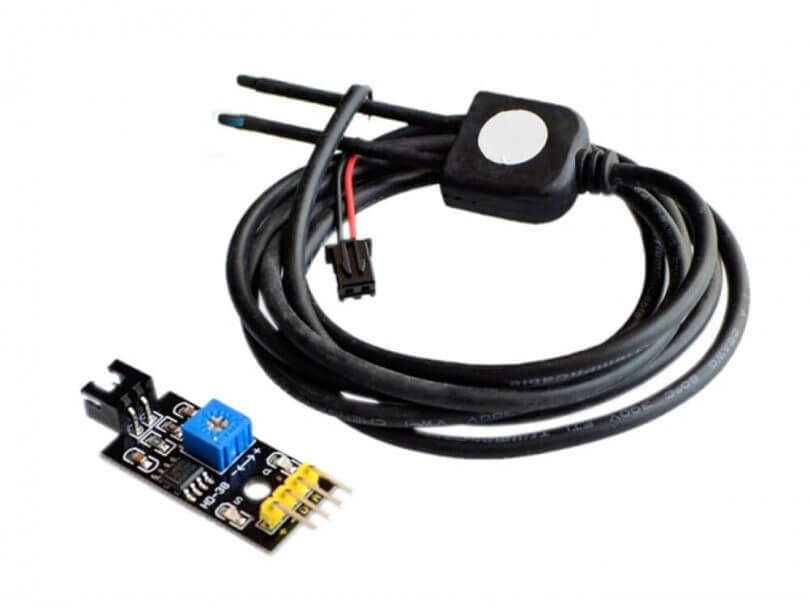 This were the first ultra-cheap soil moisture sensors for Arduino-like devices, its use is very well documented around internet, for beginners, a place to start is arduino.cc documentation.

As you can see this sensor usually comes with a volatage comparer (LM393 series on a PCB with an attached potenciometer). This device get the signal from the sensor and turns it into a digital signal thresholded by the potentiometer. So, by adjusting the potentiometer screw you’ll be able to set the threshold for a digital High or Low. The sensor can also by pluged to an analog input relying on the analog read capabilities of the device pluged into.

In resume, resistive moisture sensors work by measuring the electric resistance between poles, they do not measure soil moisture at all, what they measure is the electrical conductivity of the soil, which for instance, refer to the amount of ions present on the soil.

But more important than its relative accuracy this sensor had other major flaws. The metal compounds of the sensor surface will rapidly get corrosion due to the electrolysis process produced by the electric current flowing on a wet environment. As a result of this, two major problem appeared: toxic compounds from the sensor leaking to the soil and as a result of corrosion malfunctioning of the sensor.

So, is this a solution for measuring soil moisture?

Solutions to this flaws were found by manufacturers by covering the sensor with a layer of gold compound to avoid early corrosion, or by covering the prove with plastic protections. Other users-solutions came from using relays to avoid constant current flowing thru the sensor, using alternate current to avoid electrolysis effects, or making sensor covers. Even with those flaws, and because those sensors were so cheap they became a common solution to integrate soil humidity sensors in any plantbot-like project.

To avoid this flaws, new version of this moisture sensors were developed: